Ballerini becomes first female artist to perform at THE PLAYERS

Ballerini will become the first female artist to perform at THE PLAYERS Military Appreciation Day Concert. With the release of her debut album The First Time (Black River), she became “the only female country artist to hit #1 with her first three consecutive singles from a debut album.” She has logged four back-to-back Top 10 entries on the Billboard Top Country Albums chart, including the platinum-selling The First Time [2015], gold-selling Unapologetically [2017], gold-selling kelsea [2020], and ballerini[2020]. With 25 certifications from the RIAA to date, her catalog has a string of essential smashes such as the double-platinum “Miss Me More” and “Peter Pan” as well as the platinum “hole in the bottle” with Shania Twain—which marked Kelsea’s sixth #1.  Ballerini has garnered two GRAMMY® Award nominations, won two ACM Awards, two CMA Awards, took home the iHeartRadio Music Awards honor for “Best New Artist,” and received multiple career nominations from the ACM Awards, American Music Awards, CMA Awards, CMT Awards and People’s Choice Awards. She concluded 2021 as the “#3 most-played female artist on country radio” and CMT “Artist of the Year,” in addition to picking up “Musical Event of the Year” and “Video of the Year” at the CMA Awards for the gold-certified “half of my hometown” with Kenny Chesney. According to NPR, “Kelsea Ballerini is definitely one of the most influential women in country right now… she’s defining the sound of the genre.” She also was inducted as a member of the famed Grand Ole Opry in 2019. At the time, she was the Opry’s youngest member, in its nearly 100-year history, since being founded in 1925.

The performance will take place on the island green par-3 17th hole at THE PLAYERS Stadium Course at TPC Sawgrass and headlines several initiatives leading up to, and during, tournament week that will honor military members, veterans and their families. The concert will immediately follow the Military Appreciation Day Ceremony, which begins at 4:30 p.m. Tuesday tickets already include access to the Military Appreciation Day Ceremony and Concert and can only be purchased via THEPLAYERS.com/tickets. Tuesday parking is separate and must be purchased in advance. 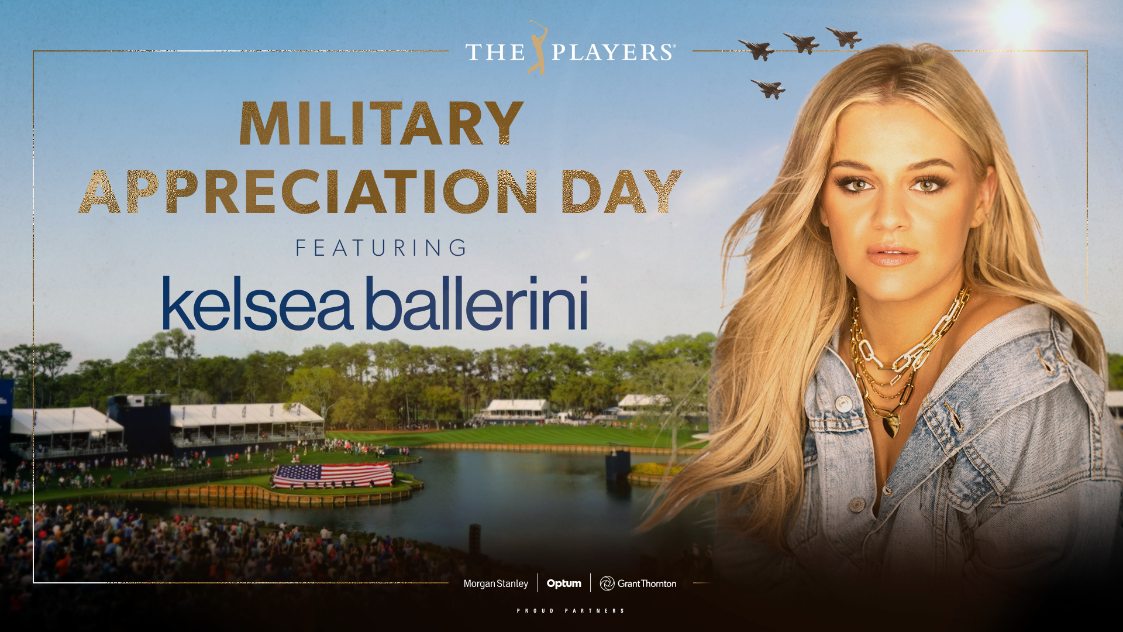 “We are excited to bring back the Military Appreciation Day Ceremony and Concert that our fans have come to know and love,” said Jared Rice, Executive Director of THE PLAYERS. “Kelsea is going to bring the star-power, energy and passion that have been staples of our Military Appreciation Day over the last 10-plus years, and we’re looking forward to a strong lineup of initiatives and programs to honor all military members, veterans and their families for everything they do to protect and defend the freedoms we enjoy.”

Please refer to the military information page on THE PLAYERS website (https://www.theplayers.com/military.html)  for a full list of military appreciation offerings and programming at the 2022 championship.

About THE PLAYERS Championship

THE PLAYERS Championship annually combines the strongest field in golf with the world-class venue that is THE PLAYERS Stadium Course at TPC Sawgrass. Optum®, Morgan Stanley and Grant Thornton LLP are the exclusive Proud Partners of THE PLAYERS. Proceeds from THE PLAYERS benefit Northeast Florida charities and have totaled more than $100 million since it began in 1974 and moved to Ponte Vedra Beach in 1977. For more on THE PLAYERS, visit THEPLAYERS.com. For more on the surrounding areas, visit floridashistoriccoast.com or visitjacksonville.com.

Founded in Chicago in 1924, Grant Thornton LLP (Grant Thornton) is the U.S. member firm of Grant Thornton International Ltd, one of the world’s leading organizations of independent audit, tax and advisory firms. Grant Thornton, which has revenues in excess of $1.9 billion and operates more than 50 offices, works with a broad range of dynamic publicly and privately held companies, government agencies, financial institutions, and civic and religious organizations.